Python has a function called sys.getrefcount() that tells you the reference count of an object. For example, the following code,

That basically means that 3 things in Python currently have the integer value 24601. Why would Python keep track of how many things have a value that’s a particular integer? Since integers are one of the immutable data types in Python, Python can save computing resources by having all the variables that contain 24601 refer to the same data in the computer’s memory. For example, if we keep running the above and now assign 24601 to the variable foo like this:

the output is now

because we’ve now created another variable with a value of 24601. We didn’t dedicate any new memory to storing the value 24601; we just created a new reference to the same memory that already contained 24601. And if we change the value of foo to be something other than 24601, like this:

the output is back to

What happens if we run sys.getrefcount() on some smaller integers?

meaning that, in Python on my computer at this time, there are 593 references to the integer 1, 87 references to 2, and 28 references to 3! This means that these small integers are used elsewhere in Python (i.e., in the guts of the program); there are lots of internal Python variables that contain 1, and many (but fewer) variables that contain 2 or 3. I thought that this gave a pretty interesting insight into the guts of Python, and it raised some interesting questions: which integers are most commonly used in Python’s internals? Which ones are least common?

Here’s the full code for plotting the output of sys.getrefcount() for every integer from 1 to 1000:

and here’s the output: 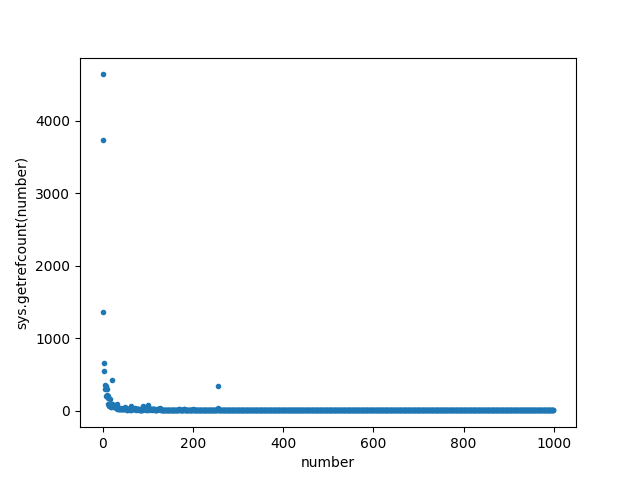 Clearly there are many more references to the small integers than the large integers in Python and matplotlib, but there are at least a couple outlier integers with unexpectedly large numbers of references. More on that in a second… 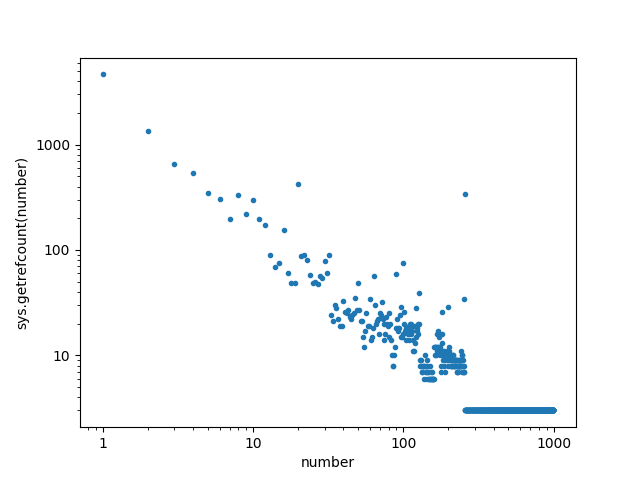 To identify the outliers in this plot (the integers that are used more than would be expected), I made a souped-up version of the plot that annotates the outlier integers: 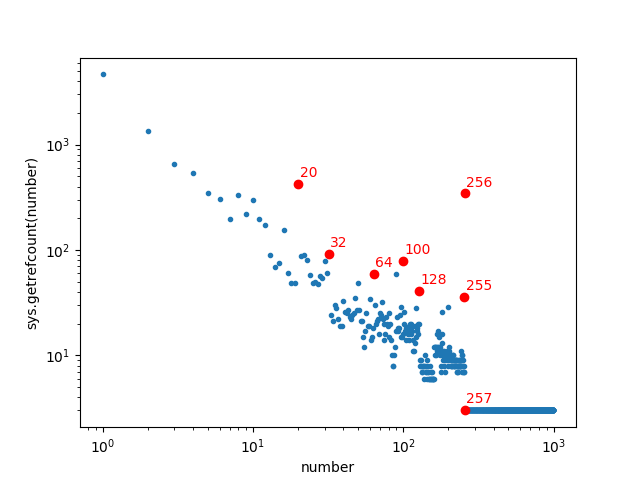 We can also see that from 257 onward, sys.getrefcount() returns only 3, meaning that Python doesn’t automatically share references to integers past 257. This doesn’t mean that integers greater than 257 aren’t used anywhere in Python’s internals, but it means that they are used so infrequently that Python doesn’t think it is worthwhile to share references to those integers. You can actually see the number 257 specified as the constant NSMALLPOSINTS in the C source code for Python. Looking at the plot above, 257 seems like an excellent choice for this cutoff; the integers above about 200 are mostly being used in less than 10 places in Python (except for the outliers 255 and 256) so sharing references to these integers will be less effective.

EDIT: Reddit user novel_yet_trivial suggested an edit that plots just the integers used by Python (and not matplotlib). Here’s the result: 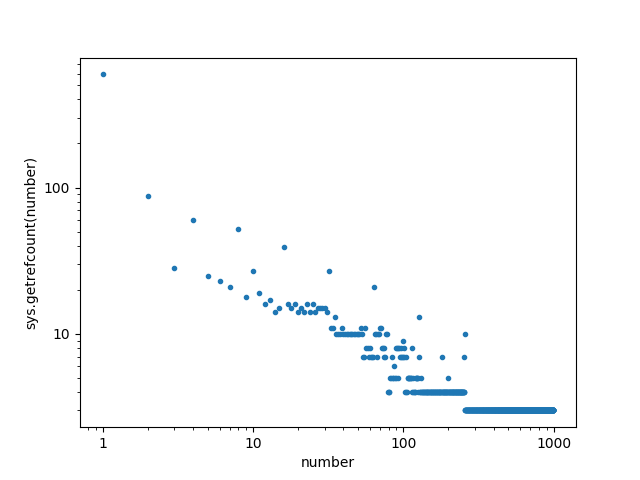 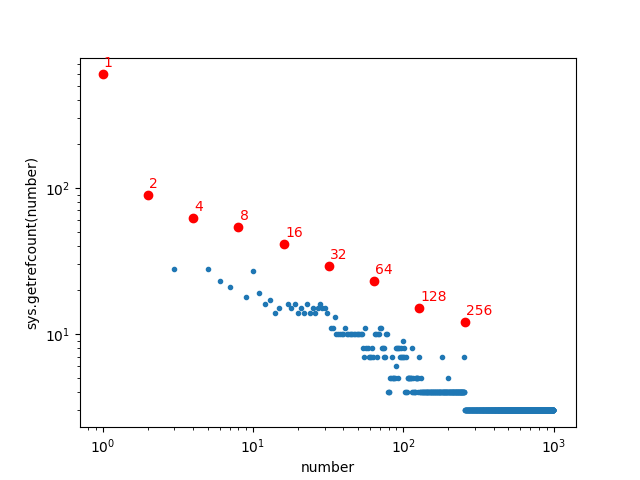 I love how each power-of-two is more commonly referenced than the surrounding numbers, and even within the powers-of-two the trend of “smaller integers are referenced more” holds true from 1 all the way to 256.

Our fun with sys.getrefcount() can extend beyond integers! Strings are also immutable in Python, and Python uses the same trick with strings as with integers to conserve computing resources. Here’s a tiny program that prints the number of references to the single-character strings from "a" to "z":

Here I’m intentionally not yet importing matplotlib (and therefore not plotting) to focus just on the strings used by the internals of Python by itself. The most-used single-character lower-case string in Python is "i" with 33 references. I guess this reflects the popularity of "i" as a generic name for an integer, used for example in parsing printf()-style format strings in Python. Second is "p" with 28 references, and I’ve got no idea why. The least common single-character strings are "o" (maybe avoided for fear of looking like a zero?) and "y" (why?).

If we import matplotlib to make a nice plot of single-character string frequencies, the numbers change dramatically because of additional use of these strings in matplotlib (which adds thousands of references to these strings): 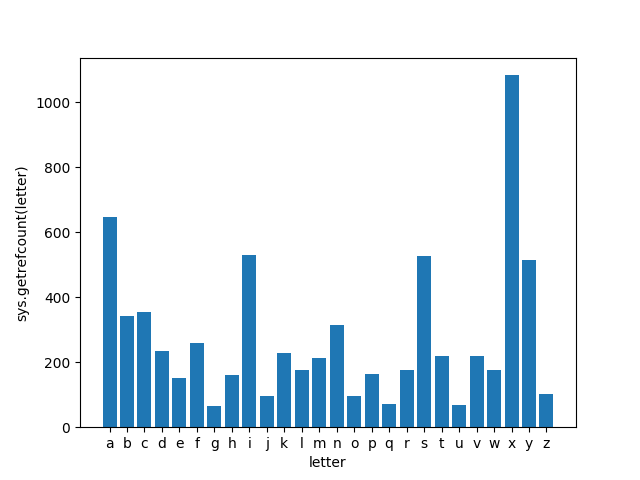 After importing matplotlib, the most common single-character string is now "x", which is almost twice as common as the second-most-common letter and surely reflects the importance of the strings "x" and "y" when plotting on Cartesian coordinates. "a", "i", "s", and "y" round out the top five.

Doing this for strings larger than single characters is tricky; I wasn’t able to use concatenation or list comprehensions to generate these strings and still have sys.getrefcount() work as expected. But you can still run sys.getrefcount() on some possible strings of interest:

Now the smallest value returned by sys.getrefcount() for a string is 5 (returned for the highly improbable string "RandomJunkBlahBlah"). If we subtract 5 from the remaining results, we find that the string "python" is referenced in 2 places by Python, "version" is referenced in 6 places, "error" in 44 places, and the first name of Python’s benevolent dictator for life is referenced absolutely nowhere in Python. Now that’s a shame…