Here’s a photo I took of a phonograph record using a microscope in my lab: 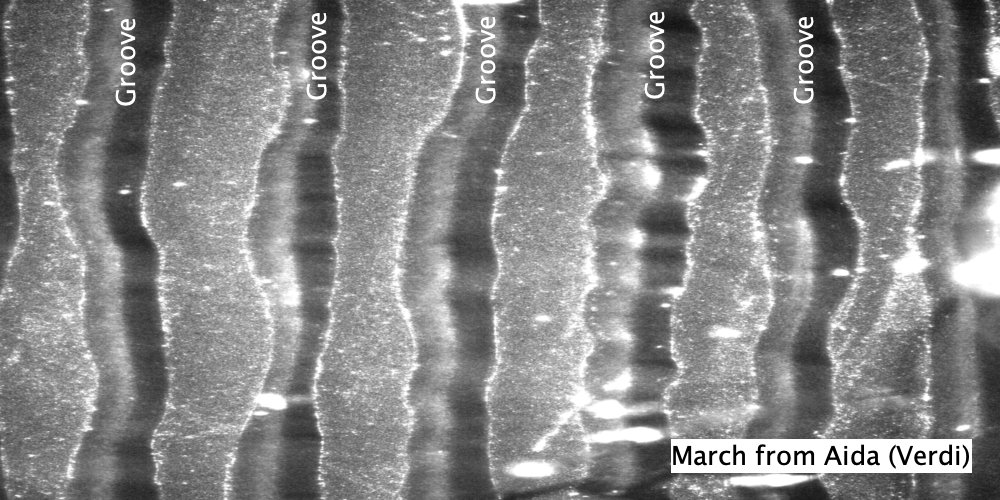 You can see the grooves, the little paths that the needle follows. If you search Google for record grooves under a microscope, you’ll find a lot of similar images of record grooves with seemingly random jagged edges. How do those jagged lines capture all of Verdi’s opera?

Luckily, I have a special record that can help answer this question:

This is a “test record” used to evaluate stereo equipment. It contains a collection of standardized tones and clicks and other noises. And while it probably never made the Billboard Top 100, it can help us understand how records work.

Here’s a closeup of a particularly riveting track that consists of nothing but a constant 600 Hz tone: 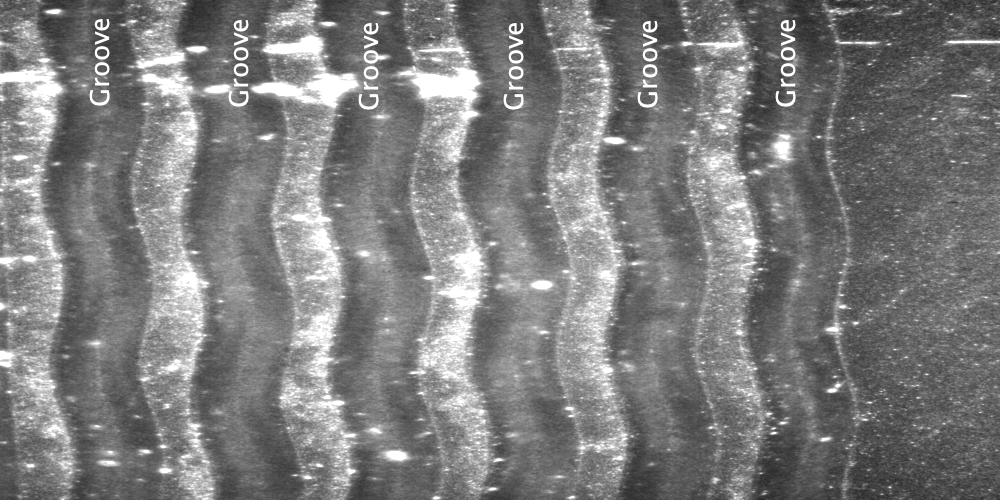 Using this simple tone, we can see how the sound is encoded in the record. The groove for this simple tone is just a sine wave; when the needle is being dragged through it, this groove wobbles the needle back and forth 600 times per second. A sensor on the needle detects this wobble and converts it to an electrical signal which oscillates 600 times per second. This signal is then amplified and sent to a speaker. The result: we hear a 600 Hz tone.

I like how the grooves wobble in sync in the photo above. It means that the circumference of the record at this groove must be an exact multiple of the wavelength of the sine wave. Here’s a nearby track with a slightly different frequency: 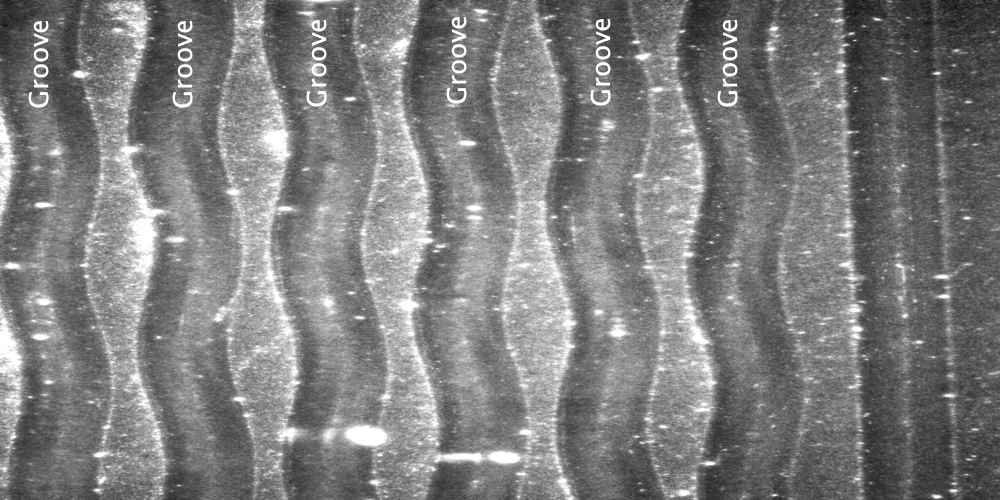 The grooves no longer wobble in sync; the waves are out of phase with each other.

The track below plays A-440, the A above Middle C on the piano. This 440 Hz note is commonly used by musicians to tune their instruments: 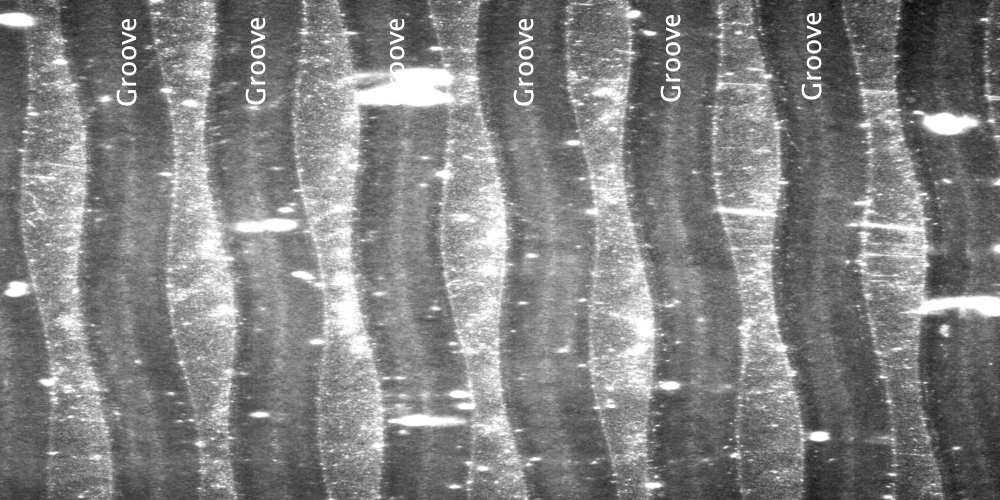 We see fewer complete wavelengths in the 440 Hz track because it’s a lower frequency than the 600 Hz tracks above.

These waveforms are simple because the sounds they encode are simple: pure tones with single frequencies. But for complex sounds like those in Verdi’s Aida, a lot of sine waves are combined together, and the resulting record groove looks a lot more complicated. Here’s Verdi again:

But the groove is still just a physical representation of the recorded sound wave, the pattern of pressure waves that traveled from the musicians’ instruments, through the air, and to the microphone that recorded this record. And by dragging a needle over that groove, we can recreate that pattern of pressure waves, send them through the air again, and into our ears, where the music lives again.

Let’s finish with a brain teaser: how do stereo records work? Remember that stereo recordings have two channels, a Left channel and a Right channel, and they can contain different sounds; that’s how you might hear a song with the vocalist in your left ear and the rest of the band in your right ear. In fact, a stereo record actually contains two totally separate recordings, but there’s still only one groove on the record, and one needle! How does that work?!?

Happily, my fancy test record has a couple tracks that are perfect for answering this question. Here’s a track that plays a 3000 Hz tone in the Left channel, and an 800 Hz tone in the Right channel: 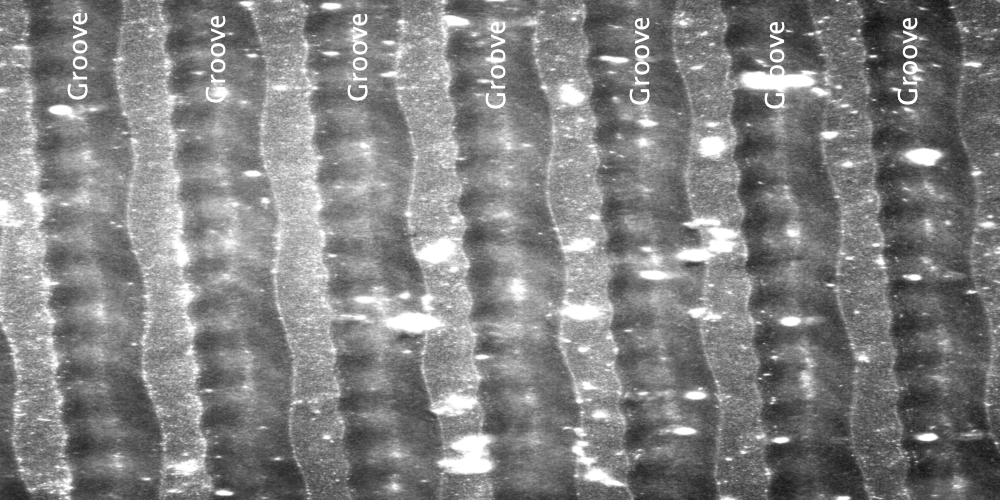 Do you see the two waveforms? If not, check out this version where I’ve highlighted the edges of one groove in red: 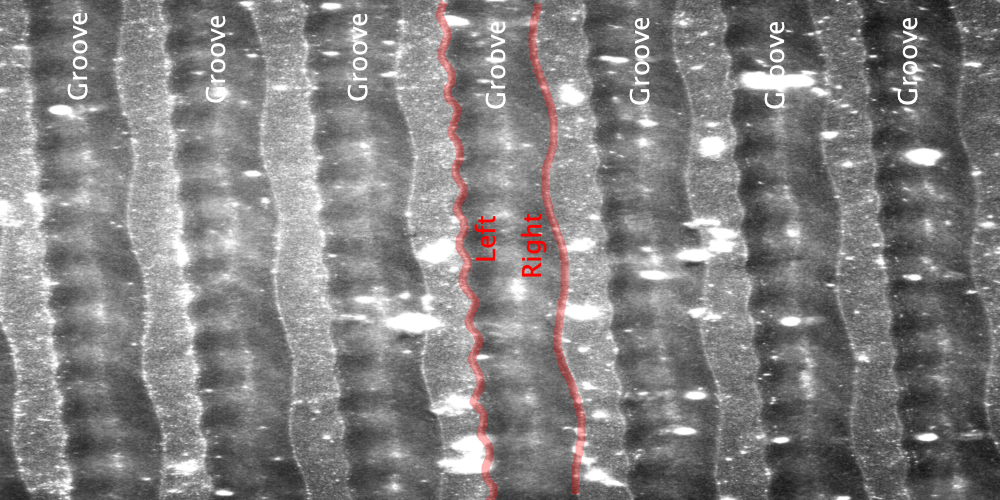 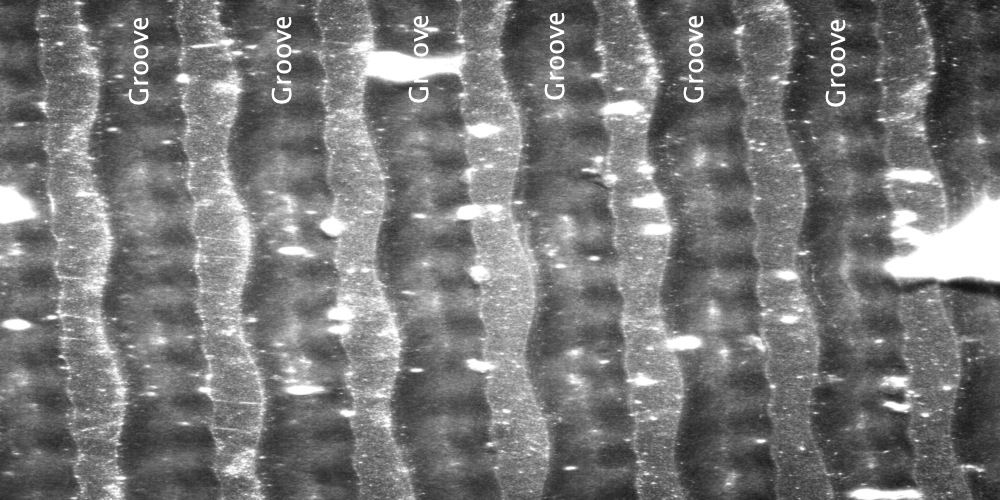 See how the edges are swapped?

In a stereo record, the needle isn’t just bouncing back and forth; it’s actually moving in two dimensions, sketching out a path that’s basically a plot of the Left channel waveform vs. the Right channel waveform. And if you view the needle’s motion along the groove as travel in a third dimension, then Verdi’s opera is just the dance of a needle through space, a dance a fraction of a millimeter wide and half a kilometer long, a slow dance for the low notes, a fast dance for the high notes, a subdued dance for the quiet notes, a frenetic dance for the loud notes, a shimmy one way for our left ears, and a shake the other way for our right.